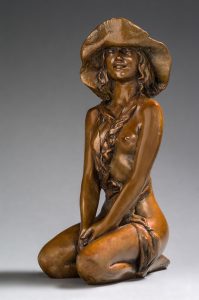 Jacques LE NANTEC draws from his childhood. At thirteen, he restores a broken statue and discovered a passion for sculpture.

However, no art school are still at Chambery, where his father, a soldier, has been affected.
With earth pottery, it will therefore be initiated only in sculpture, in a small room lent by the Youth.

In October 1957, the gallery People and Culture in Annecy, presents its first fifteen works, including two pieces size. Meanwhile, the first tray was made with bonus, a presentation at the Concours Général in three subjects.

But the following year, the second bin is obtained only narrowly : it is presented as an independent candidate and, except for Sculpture, he does not want to hear about studies.

In 1959, his father was transferred to Paris.
Jacques LE NANTEC can access the École nationale supérieure des beaux-arts … but it’s section Architecture (Workshop Christmas Maresquier) that must register to meet his parents.

One issue, for an “honorable leak” it undertakes acceleration of Appeal.

He returned to Algeria in 1962. To live and support his sculptures, he is alternately designer, cartoonist (Spirou magazine) and modeller of wax figures.

Self-taught, he persists and signs, continuing to study anatomy … This, of course, reveal that women of this time and far removed from the “academies” of yesteryear.